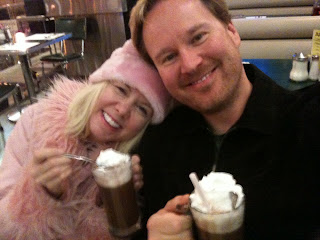 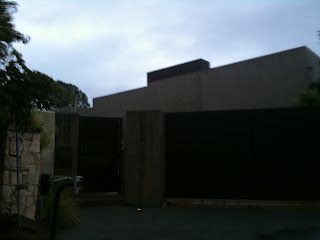 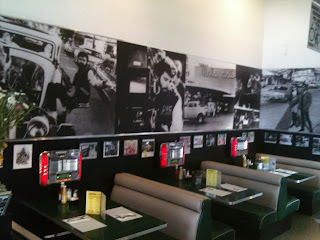 It is 6 a.m. and I am sitting at Mel's diner on Sunset blvd. made famous by the George Lucas' movie, American Graffiti. This is my third time here at Mel's this trip. The first and second time were both late night jaunts with my pink pal, Ms. Kitten Kay Sera. Kitten and I each had a bevy of hot chocolates which (to our surprise) ran us about $50... plus we each had Caesar salads, where Kitten cleverly added avocado...a delicious contribution that I will be adding to my Ceaser salads for now on.

Last visit to Mel's we both brought our lap tops (which I am doing now) and sat across from Gene Simmons' daughter, Sophie, who (I must confess) was much larger in stature than I would have expected. (I was totally glued to the Simmon's family reality TV show last year, so it was a pleasure to see her walk in.) Anyway, when it comes to people on TV or movies they are typically *much smaller* in person. Sophie and her friend sat and loudly giggled about boys they were dating & parties they were going to...only to suddenly break and fall completely silent for text breaks and Facebook updates.

Today is an over cast day. It is drizzling rain outside. But it looks like it might clear once the sun comes out a little more.

Oh, speaking of media people who appear much smaller in person, I just got back from my traditional drive down Doheney to 9045 Oriel where Madonna used to live. I am sure by now some of you have already heard the story of when I went running with M years ago when she was in town (Houston) opening her Blonde Ambition tour back in 1990. And if not, that is a story for another time. But the deal presently is...I have been in L.A. since May 1, and besides busy working on getting Kitten and I booked for the West Hollywood Pride Parade when I first got here, a few days later, I became overcome with one of the worst colds I have had in sometime! (Thanks to some sick man kindly coughing all over me on the plane!) After spending over a $100 on over the counter cold/cough meds...it took me over two weeks to recover from that bug...so I had to delay my ritual of driving by M's old casa I am quite fond of.

Back story: When I first arrived in L.A. back in 1992 to appear on the Rick Dees Show for my song EVERYBODY ELSE (an AIDS tribute song I wrote) which was playing on Top 40 radio at the time (YES! I really was played on Top 40 Radio...ONCE...A LONG TIME AGO!)

I had it in my head that I wanted to drop off a copy of EVERYBODY ELSE for Madonna. Being only 22 at the time it really did not occur to me (until I found myself standing at her front door) that it was prolly an invasion of her privacy for me to just be showing up like that! But I figured I was on the radio now... so we were 'sorta' on equal footing. I smile real big now at my sheer gumption to simply believe I belonged anywhere I wanted to back then while I sought to find a way to make myself fit! Anyway... there was a party going on at M's house that day and I pretty much blended in with everyone else. That is until I heard M laugh from behind the front door that was just about to open. A security guard who had started to eye ball me saw me gulp real hard and it was then that the jig was up...and I was invited to return to my car. Knowing that getting thru that front door was futile, I sighed, rolled my eyes and obliged, but not until I threw a copy of my song into her open Mercedes convertible! LOL! Anyway, every time I come back to L.A. I like to drive up into the hills and return to M's house for lots of nostalgic reasons, but mostly to remind me of the guts I used to have and try to mimic from time to time.

OK...as I have been typing away, I am watching a really cute English couple who are obviously tourists taking pictures of each other with their fancy camera. Over in the corner I can hear some staff writers for some of the TV shows discussing their ideas for the upcoming shows and in back of me is an A&R for Capitol records talking about a new rock band the label has signed.

My chili cheeze fries have arrived at the table! Yum! I know, not exactly breakfast fare, but that is the way I roll. Besides I have been up all night. Again...the way I roll. Couldn't sleep. Had too much on my mind. I kept thinking about my book manuscript for REMEMBERING HEAVEN that I have been working on and making hand written notes on over the past year... that had gotten lost in the mail. It had been thrown into a box last minute 'cause I had to catch my plane to L.A. and ran out of room in my luggage! So I had Jamie ship it (and my ISAGENIX) to West Hollywood due to the fact that my suit cases were way over the airlines 50 lb limit! Which results into a $100 fine per bag. PS: Just so you know... anything over 70lbs is rejected! I swear, what do the airlines expect when you take an extended trip and you are only allowed 2 bags and one small carry on-that can't contain any liquids or other items deemed contraband by TSA!??
I so miss the old days when you could just stuff a bag or 3... and not worry about what you were bringing! Anyway... LUCKY, LUCKY ME!! After being missing for over 3 weeks...the box finally showed up! Thank you God! It was really stupid of me to have thrown the manuscript in the box like that. And poor Jamie (having one of his zanny moments) lost the confirmation slip so we had no way to track the box. He wrote me the cutest 'THANK GOD!!' text when I let him know the box showed. I am sure he had a few restless nights too.

Went to a late night funny movie that everyone is talking about 'Brides Maids' I will give a B. I went to the pals Kitten, Kelly Kidd and his new adorable BF, Justin Carter, whose audition on American Idol was recently featured on the show. Expect to hear new music coming from Mr. Justin soon--he is working on his EP now.

Speaking of working on an EP, thanks to the cold I had making me lose my voice, I had to delay my recording of my upcoming single. My producer, Joe of HITPLAY is doing a concert for Long Beach Pride next week. So the soonest we will be able to get together is next week. Will keep everyone posted on Facebook.

OK, I am feeling guilty about those Chili Cheese Fries now...so I guess it is time for me to go hit Runyon Canyon! Thank God for that place! It is a great work out!! Kitten and I have been eating out every nite at Baby Blues BBQ (which is better than Texas BBQ) or Chin Chins (I have been addicted to their steamed chicken pot stickers since I first ever visited L.A.) or Koo Koo Roo (which has the best homemade Chicken Noodle Soup). And it is near impossible to watch one's weight, even with all the exercise I have been getting at Runyon. I try to go every day or every other day, but since all the eating out, my tum tum is starting to make an unauthorized reappearance...since ISAGENIX helped me get it down last summer. Luckily my lost box arrived with my packed ISAGENIX in it. I can start taking it again this afternoon. It usually takes about 3 /4 days and my body stops retaining water and starts to normalize. FYI: Rupaul has released a fabu new album called, GLAMAZON which has given me much inspiration as I have run up and down those steep hills at Runyon Canyon.
Note to Rupaul: Thank you Super Ru... You always release the most inspirational pop/dance music that is out there Bro!
Kitten has been good and going with me every now and then to Runyon. She occupies her self by making fast friends with all the cute puppy dogs who are in attendance with their fit masters. ...I swear I have never seen so many 'in shape' people in my life.

Speaking of in shape people, I totally need to brag on my friend Kelly, who has the best arms ever! I joke with him and tell him they should have their own zip code! I am so proud of him!!From working out 5 times a week and eating frequent/decent quality meals... he went from a smaller ectomorphic (thin frame) to a truly mezomophic, super strong, V-back build! Amazing! He is proof that anyone can change their build if they really want to! All you have to do is be willing to 'show up' for yourself every day and work hard enough!
It is really awesome to have friends around you who inspire you! : )
Posted by Christian Andreason at 6:16 AM